The Good
The internet provides many opportunities for people to communicate with one another via social networks, online games, phone calls, texting, etc. The aspects to this connectivity are the ability to easily contact friends and family who live in other states or countries, exposure to people and places across the world, and access to international news events as they are happening. Students can easily keep in contact with family and friends back home while living in the U.S.—and probably for free! This is a big change from years past when cell phones and internet did not exist, and phone calls made to other countries were very costly and rare.

The Bad
The internet, social networks, and online games are all ways that keep people engaged with their (sometimes multiple) electronic devices for hours a day, sometimes to a degree that is not healthy for the mind, body, or real life relationships.

Students who have constant contact with friends and family back home tend to be more homesick and not enjoy their time in America simply because they are not allowing themselves the time to build relationships here. If students choose to spend all of their free time on the internet instead of interacting with their Host Families and friends, this will interfere with having a successful exchange experience.

It is acceptable to use the internet, social networks, and online games occasionally as a stress reliever or as a social activity, but it is important to balance free time with other activities that are not dependent upon the internet.

The Ugly
Sometimes people forget that extra-curricular time online is a choice, because they begin to depend on checking or updating statuses, gaming with virtual friends, viewing pornography, etc. as determinants for personal happiness. These online habits become unhealthy (and verge on addiction) when daily life necessities such as: proper hygiene, eating healthy food, getting enough sleep, and exercise are frequently ignored. It can also be deemed unhealthy when students start to neglect and not put time and effort into real life relationships.

If someone begins to suffer physical pain (a sore neck, aching wrists, strained eyes, etc.) from excessive internet use/ gaming, it is safe to say that is not healthy and habits need to change in order to have a happier, healthier exchange experience.

A stereotype is defined as a non-factual assumption about individuals or a group of people. Stereotypes can be positive or negative and can pertain to race, religion, gender, occupation, age, culture, and more.

Everyone around the world holds stereotypes to some degree. Some are conscious and some are subconscious. Many factors influence stereotypical thinking, including: culture, communities, religion, advertising, movies, TV Shows, music, celebrities, news, etc.

For example, some commonly held stereotypes about Americans are that we are loud and arrogant, we eat a lot of fast food (particularly McDonald’s and pizza), and everything in the U.S. is large compared to other countries (i.e. houses, streets, cars, yards, food portions, and people).

St. Paul Prep students are influenced by American pop culture well before they arrive on program. They have probably watched American films or TV shows, listened to American music, and read about American celebrities and/or politics. That exposure has most likely influenced their ideas of the United States as a whole.

One of our goals is to foster international understanding between cultures. Every student who decides to participate in one of our programs is deciding to live in the U.S., which means they will come face-to-face with the reality of life in the U.S., and therefore, with any stereotypes that they hold about Americans and the United States of America.

Host Families are in the same position. They volunteer to host a student from a specific country. The student arrives and perhaps it is different than expected. Ultimately, both sides are faced with the realities of each other and must learn to allow one another to be who they are as individuals. Sometimes reaching full cultural understanding takes a while, depending on how strongly assumptions are held by each party.

Cultural exchange is a wonderful opportunity for students, Host Families, and SPP staff to challenge what we think is true, which is an important factor in breaking down stereotypes. Through these experiences, we grow more knowledgeable to the realities of cultural exchange. What an enriching experience to share with one another! 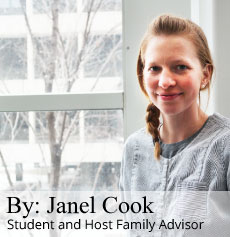 How would you describe your communication style: direct or indirect? Did you know that Americans are considered to be some of the most direct communicators in the world?

In the United States, people tend to be more direct when communicating compared to other countries where indirect conversations are the norm. This means that students might have moments of miscommunication, embarrassment, or confusion simply due to different communication styles. This is normal and okay; they are from different countries
and cultures after all.

How do you bridge the gap between indirect and direct communication styles? Ask open ended questions (therefore avoiding yes or no answers), set aside time everyday for conversation with your student, and don’t assume that the student understands you, especially during the first few weeks of their arrival. Be sure to ask follow up questions to ensure that communication is crystal clear for everyone. Most of all, have fun and enjoy your time conversing across cultures.

Direct communicators (U.S. and most European countries) are typically straight to the point, open to confronting issues, and willing to engage in conflict if necessary. They
express opinions freely, say things clearly, and do not leave room for interpretation.

Indirect communicators (Japan, South Korea, China and many Latin American countries) focus on how something is said more so than what is said, avoid difficult or potentially
embarrassing situations (called saving face), avoid conflict whenever possible, express opinions and concerns diplomatically, and count on the listener to interpret the meaning of what is said.

“[F]lexibility and mutual respect are key to dealing with differences in communication styles.” -Cynthia Joyce, professor