Coming to St. Paul Prep (SPP) was my fate. A lot of people don’t believe in destiny and call it “coincidence,” but whatever it was, it gave a twist to my life. I had different plans before coming here. In fact, I didn’t know about the school’s existence until August 2016, one month before flying to America. Originally, I was going to study in one of the best schools in Boston. I had already discussed my specific case with the school, had found a Host Family, and even had my ticket reserved, but due to visa and school inconveniences, I had to let that dream fade away and stay in Venezuela.

Having to hear “You’re staying,” was one of the toughest things, and I refused to believe it. I seriously disliked my school in Venezuela because they taught me nothing, and I felt like my parents were simply wasting their money in what had been promised to be the best school in my city. However, as much as this news dragged me down, I had to embrace the fact that I had no other option, be grateful for what I have, and understand that everything happens for a reason.

It wasn’t my destiny to go to Boston because it was my fate to discover the Twin Cities.

A week before my 11th grade was over, I decided to go visit my aunt the same day my mom was flying to Caracas (Venezuela’s capital city). I wasn’t supposed to go with her, and I didn’t even know what time her flight was, but for some unknown reason (because I usually don’t spend much time in my house) I decided to go back home to watch a movie with my little sister.

When I was driving back, I stumbled upon my mom by “coincidence” and thought “Well, accompanying her to the airport wouldn’t hurt me, and I won’t see her in a while, so talk to her and ask her to wait for you while you dropped off the car at the house,” and so she did.

When we got to the airport, my friend Kike happened to be in there as well. Kike is one of those old friends whom you stopped hanging out with a while ago, yet the friendship remained the same. I greeted him with a warm hug, asked him how he was, and where he was going. He told me he was going to Caracas for a meeting with Students Program, an exchange student organization that is affiliated with another organization named Nacel. I felt excited for him, especially because I had also planned to do my senior year in the U.S., but it wasn’t possible, I told him. We continued talking when he finally said: “You can email the organization, and they can find you an international school that will give you a high school diploma.”

In that moment, I became deaf to every single individual in the room. I could not believe it. Here was my last chance to (as sad as it sounds) escape my disastrous school situation in Venezuela. I hushed Kike and ran to find my mom and tell her this news. Her flight had already arrived so there was not much time to talk to her, but odds were in my favor: Kike’s mom’s seat on the plane was next to my mom’s. They spent the entire flight discussing the benefits of this program they had just introduced to us, and as the plane landed in Caracas, my mom called my dad.

We had a few meetings with the program, and three weeks later, I began this journey to SPP. 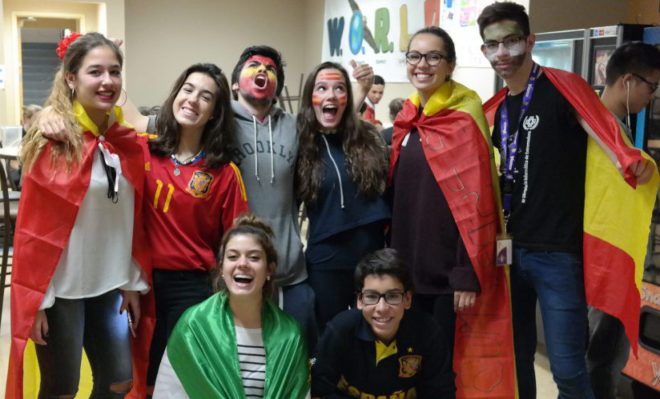 The start of the St. Paul Preparatory School 2014-15 school year is less than a month away and many of our students will be making a trip to the northern United States. As both new and returning students prepare for their trip many of them may struggle with what exactly to bring with them. Packing may seem like a simple task but when you are planning to stay far away from home for almost a year this task can seem scary and overwhelming. We narrowed down the essential items that you may need when traveling to Minnesota from another country.

Toiletries: (Note: If these items are in your carry-on bag they need to be TSA Compliant)

What’s on your packing list? Did we miss anything? Let us know!